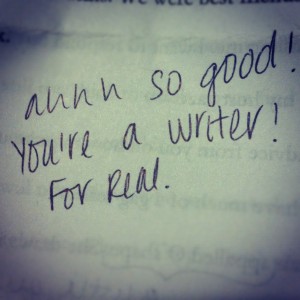 A note from one of my writing group members, Tricia

I joined a writing group a little over two years ago. Our initial plan was to work our way through Julia Cameron’s book, The Artist’s Way: A Spiritual Path to Higher Creativity, and eventually to share our writing, in some vaguely imagined, far-off future, when the idea of sharing writing didn’t horrify us.

I had reservations: about the book’s florid, New Age-y tone, its soul-baring thought exercises, and about sharing something as personal as my writing with my friend Christina and two women I’d never met.

But I did it anyway, because I knew deep down that I wanted to write a young adult novel. There was just one problem.

I wasn’t doing any writing on my own. At all.

After college I’d worked on documentaries for film and television. Spending all day with emotionally draining, often devastating true stories, I turned to young adult books from authors like Meg Cabot and Sarah Dessen for relief, making great use of the New York Public Library and the Barnes & Noble mere blocks from my office as the young adult selection grew.

Eventually, I got bored with supporting content while not being allowed to offer any creative input of my own. I was still pursuing corporate entertainment jobs, but I struggled to answer the question of why I even wanted them anymore, which made interviews excruciating and fruitless.

The Artist’s Way describes the concept of a shadow artist – someone who facilitates others’ creativity instead of cultivating his or her own:

Artists love other artists. Shadow artists are gravitating to their rightful tribe but cannot yet claim their birthright. Very often audacity, not talent, makes one person an artist and another a shadow artist – hiding in the shadows, afraid to step out and expose the dream to the light, fearful that it will disintegrate to the touch.

This hippie book released the fears I’d held about writing. Those two women I’d never met? Were now two of my closest friends.

Writing group meetings, first held in the neutral territory of coffee shops, moved into our respective apartments, complete with dinner and late-into-the-night discussions of life and craft, celebrations of triumphs – like Christina’s book deal, and support for setbacks – like a freelance writing opportunity that didn’t pan out. Emboldened, I started taking writing classes and working on the young adult novel I’d had had in my head since early in my TV days.

One day last year, I had an informational meeting with a TV executive with whom I’d connected.

Upon hearing about my book-in-progress, he said, “I know so many young artists who are in the same position,” and suggested I stop pursuing mentally exhausting, creativity-sucking TV jobs to focus on my book.

Even after The Artist’s Way, even after the positive feedback from my writing classes, being identified as an artist was the validation I craved. It gave me permission to stop chasing jobs I no longer wanted. From that moment on, I was all in. I funneled all of my creative energy into writing the best book I could.

I finished the book by the end of the year. I perfected my query letter. I researched agents. And two weeks and one day after I started querying, I got an email from my now-agent, Sara Crowe, telling me how much she loved my book.

Whatever happens next, I am not going back into the shadows. I’m an artist.

3 thoughts on “Shadow Artist No More”